To share your memory on the wall of Joseph Wrabel, sign in using one of the following options:

He was the retired Co-Owner and Chief Financial Officer of Capital Trailways Bus Company, an Ordained Permanent Deacon for the Roman Catholic Diocese of Harrisburg and was a member of the United States Army Reserve.

Deacon Joe was a Graduate of Scranton Technical High School, attended Mount St. Mary''s College, the University of Scranton and Elizabethtown College, where he received his Bachelor of Science Degree in Accounting. He was an Honorary Graduate of Bishop McDevitt High School and the proud Chaplain of the Bishop McDevitt Crusader Football Team for almost 40 years; a member of Holy Name of Jesus Roman Catholic Church, where he was assigned as a Permanent Deacon for 43 years. He was a Fourth Degree Member of J.W. Shanahan General Assembly Knights of Columbus; Holy Name of Jesus Knights of Columbus Council #14081, where he served as Chaplain.

Joseph was the son of the late Joseph L. and Irene Regenye Wrabel and is survived by his Loving Wife of 58 years, Elaine S. Torquato Wrabel; one daughter, Judy A. Bullock and husband Brian, Harrisburg; two sons, Joseph John Wrabel, Jr. (Jay) and wife Kris, Harrisburg and Jeffrey P. Wrabel and wife Lori, Harrisburg; 6 grandchildren, Joey, Jamie, Connor, Ashley, Max and Elise and three Cousins. He was preceded in death by a foster Brother, Tibor Gaal.

Over the course of 43 years of serving as a Permanent Deacon, Deacon Wrabel touched the lives of countless individuals through his faith, compassion, kindness, humility, empathy, sympathy and his sincere ability to listen. His commitment to Bishop McDevitt High School, enhanced the lives of students, staff and faculty on a consistent basis. He brought many souls back to God through his ministry and numerous Baptisms, Holy Communions, Marriages and Funerals. May he now enjoy the fruits of his labor.
Mass of Christian Burial will be Con-Celebrated on Thursday, June 3, 2021 at 11:00am, on the 43rd Anniversary of his Ordination, in Holy Name of Jesus Roman Catholic Church, 6150 Allentown Blvd., with the Most Rev. Ronald W. Gainer, D.D., J.C.L, Bishop of Harrisburg, as Principal Celebrant and Homilist Rev. Edward Quinlan, Pastor. Entombment will be in Resurrection Cemetery. A viewing will be held on Wednesday, June 2, 2021 from 6:00 pm - 8:00 pm and on Thursday from 10:00 am - 10:45 am in his church. Arrangements by Wiedeman Funeral Home and Cremation Services, Inc., 357 South Harrisburg Street, Oberlin.

To send flowers to the family or plant a tree in memory of Joseph Wrabel, please visit our Heartfelt Sympathies Store.

We encourage you to share your most beloved memories of Joseph here, so that the family and other loved ones can always see it. You can upload cherished photographs, or share your favorite stories, and can even comment on those shared by others.

Diane & Anthony Torquato and family sent flowers to the family of Joseph Wrabel.
Show you care by sending flowers

Loving Lilies & Roses Bouquet was purchased and planted a memorial tree for the family of Joseph Wrabel. Send Flowers

Posted May 27, 2021 at 03:18pm
So many happy memories. Deacon Joe married my wife and me and baptized my two kids. He was a great neighbor, friend, spiritual pastor, and wonderful human being. You will be deeply missed. May you rest in peace. My deepest condolences and prayers for the Wrabel family. May God bless and give comfort to Elaine Wrabel and the rest of the family. Raffy Luquis & Family.
Comment Share
Share via:
MD

Posted May 27, 2021 at 02:47pm
Many happy memories of serving on the altar with Deacon. Thank you for being a true minister of Christ and friend to all at your beloved Holy Name and Bishop McDevitt. Requiescas in pace Domini tui, Deacone carissime. - Michael DiMarco
Comment Share
Share via:
MG

Posted May 27, 2021 at 10:46am
I will never forget Deacon's counsel to me on how to become a better lector. I believe I am also a better person for having known him. Your family is in my heart and my prayers. Maria Gallagher
Comment Share
Share via: 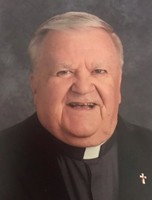